He says every model has been better than the previous one, and his latest has been kitted out with great new technology – WEED-IT optical spot spraying system, Raven XRT boom-levelling and Ag Leader GPS.

Simon manages Duaringa Station. It is one of three properties in Central Queensland owned by his parents Bruce and Beryl Donovan under the umbrella of Donovan Farming Company Pty Ltd.

They produce durum wheat, chickpeas, cotton, sorghum and corn on 4800 ha. The RoGator covers that ground at least four times a year.

The family purchased their first RoGator in 2004. A local contractor had one and it seemed robust, so that was their choice when their old sprayer needed replacing. They are now onto their fourth one.

For the durability and the toughness of the machine, we have found RoGators to be second to none.

Every model has seemed great, but then the next one arrives and it has improved. It is a nice feeling knowing that the manufacturer is listening to farmers and making the changes.

For example, Simon wanted to spend more time in the paddock. He now has a 6000-litre tank with the chassis upgraded to accommodate this.

“There have been upgrades in the wheel motors, so it handles the conditions even better.”

“It never worked that well. This machine has its own awesome filtration system. They have nailed it. It is built to handle the volume of water we want to use.

“Another improvement is to the boom. Other brands don’t seem to handle our conditions. We can’t fault this one.”

The boom is 36m, fully recirculating, and is equipped to do both broadcast spraying and spot spraying with WEED-IT.

The WEED-IT system has blue LED sensors at 1m intervals along the boom. Each sensor controls four nozzles which are fired when a weed is detected. The superior mode of detection used by the WEED-IT system ensures very small weeds can be targeted before they set seed.

With spot spraying we are saving at least 80 percent in chemicals even though we apply at a higher rate.

“We are really smashing it, hitting the plant with four times the rate.”

He can also use more targeted sprays, which are usually more expensive.

A particular problem in central Queensland is Feathertop Rhodes grass, which is becoming resistant. The WEED-IT system allows him to control it.

“If I didn’t have this I would have to put steel in the ground and break up the soil structure. I am hitting the target weeds harder and saving ourselves a lot of work and money.”

Spot spraying is slower at about 14 kph compared to the 24 kph Simon drives when using the RoGator as a blanket sprayer.

At those speeds Raven XRT boom-levelling is quite handy.

“When I turn corners or drive through a washout the boom height stays consistent. It does not hit the ground so it protects the boom. It should really be compulsory.

“Each WEED-IT sensor is worth $5000 so you don’t want to start smashing them up. Without Raven I have to rely on my ability to keep it level.”

Raven XRT’s radar-based sensors detect the ground and keep the boom stable in three dimensions. This also helps reduce spray drift because the boom is at a consistent height above the crop.

The RoGator has a recirculating boom and ClearFlow product recovery. It uses air to push unused product back from the lines into the tank, or it can blow it out of the nozzles.

Combined with the rinse tank, they clean the RoGator out and ready for its next task. So, it is not hard to change from herbicides to fungicides or foliar fertiliser.

A large induction hopper allows for easy mixing of any product, be it liquid or granules, while in the tank the product is constantly moving and mixing.

With OptiMotion, the amount of agitation automatically changes as the level in the tank drops.

Simon says the new RoGator 1300C is really user-friendly. The cab is comfortable and quiet, which is just as well since he feels like he lives in it.

It becomes his office and is set up with air-conditioning, a sound system, Bluetooth and connections for his iPad.

The RoGator even comes with its own weather station.

“It gives you the humidity and wind’s speed and direction. Info is king. We can make decisions on the go, so the chemical is on the target and we do not affect neighbours,” Simon says.

He particularly likes the reversing camera. It reduces the stress of backing a large machine when kids and animals could be around.

The width of the wheel track is adjustable from the cab to fit with different tramlines.

GPS, auto-steer and sectional control are through Ag Leader.

Runs on Duaringa Station are up to 8 km long and auto-steer takes the fatigue out of the day.

“You can change everything on the go. You don’t have to get out of the cab to make an adjustment.”

a drive system that practically runs itself

The RoGator has an 8.4-litre, 340hp, engine connected to a new SmartDrive transmission which automatically adjusts engine RPM to the power required – this means Simon sets the speed and the RoGator does the rest.

“Fuel efficiency is awesome. It does not work harder than it has to.”

“Croplands spent all day with me. This is a massive investment and you get what you need. Training and the answers to any questions are only a phone call away. I can’t fault them.”

No matter how great the technology, a business has to justify the investment and the RoGator adds up for the Donovan family. 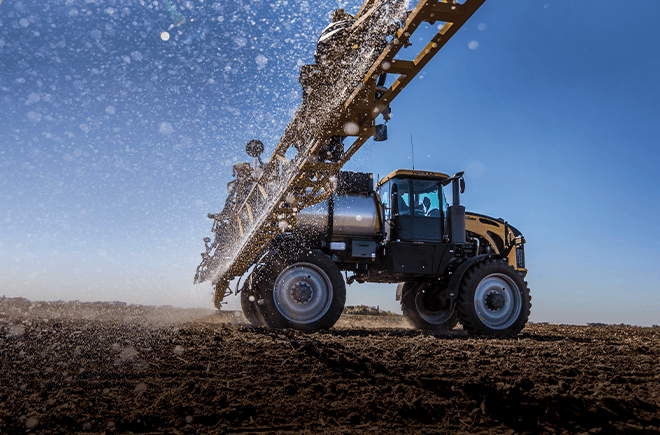